An excellent weekend of Hobie racing at Lake Wendouree.

Saturday was a hot windless day, not a cloud in the sky, we all spent the whole day catching up with each other telling stories over a few drinks on the bar. At exactly 430pm the days anticipation was finally put to rest and not a race was sailed. But it didn’t stop the fleet of 3 Dragoons a few 14’s and 16’s rigging up at 5pm and blasting around the lake in a late afternoon 10 knot breeze.

Sunday morning we woke to a strong westerly wind hitting 20 knots at times, it was cold now, raining while we rigged and black storm clouds surrounding Ballarat.
So up goes the 30min warning flag at 10am and we all panic and drag and push our boats off the grass over concrete ramp into the lake. Our first real test of the lake, only about 1.5 meters deep, the week before a spacial machine mowed the reeds in the lake at least deep enough so our rudders did not collect on them.
It was short course racing like no one had ever seen before, weather mark only 300meters from the start line, course 4 was displayed and away we all went, 3 Dragoons, then 12 Hobie 14’s then 10 Hobie 16’s.
Three races were sailed before lunch break. After lunch the wind died down and the sun reappeared and we squeezed in 4 more races. The finish line was a flag positioned 30meters off the yacht club which gave all the spectators a spectacular view of the Hobies as the crossed the line, at times it looked more like a horse race than a yacht race or maybe a 100 meter sprint at the Olympics, Campbell and Nomes displaying their lurch over the line, severals boats hitting the finish line all at once.
By late afternoon we all enjoyed a spit roast of beef, chicken and pork and a huge selection of desserts more than we could all eat.

Monday morning came and the results showed a close competition in all classes. The wind was still about 5 to 10knots, 3 races were sailed, then the wind shifted again to the west and 1 final race was sailed in a good 15 to 20 knots. The 16’s were so close between the top 3 that no-one knew who had won until the results were read out at the presentation.

Overall the Ballarat YC did a fantastic job getting 11 races in. The short course was in fact a lot of fun. 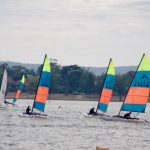 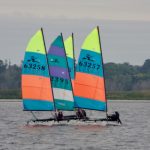 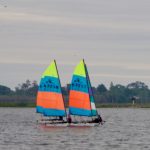 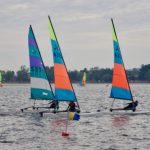 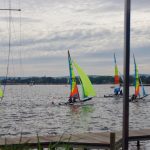 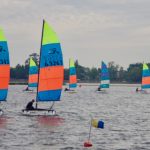 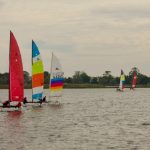 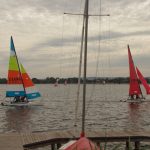 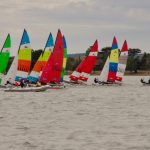 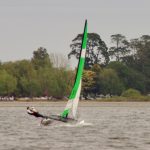 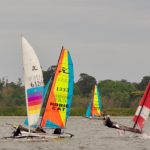 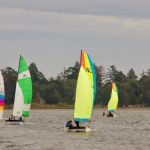 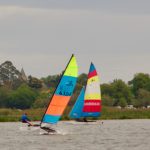 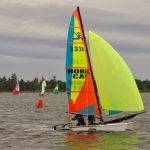 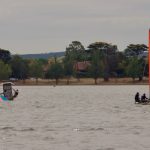 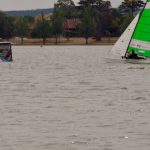 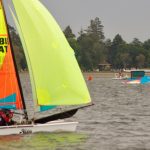 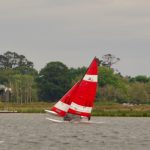 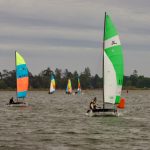 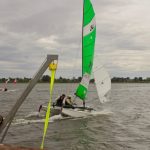 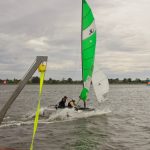 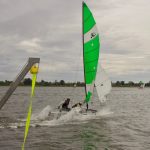 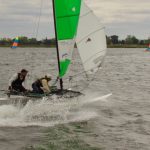 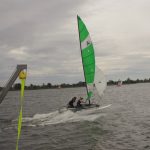 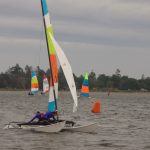 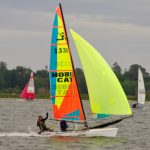 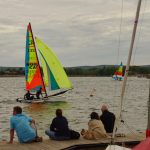