This is the moment we’ve been waiting for Cowboy Sailors.

As La Lina continues to rain down the much despised deluge the east coast has been experiencing, we sit here in sogginess and dream of what is to come. The Hobie Family sends out all our love to our mates in northern NSW and south-east QLD as they experience yet another onslaught of an east coast low.

But now, Cowboy Sailors, it is time to dream no more, as we officially publish and bring to you the Notice of Race (NOR) and schedule for the 50th Australian Hobie Cat National Championships. Taking place on the South Coast of NSW in Jervis Bay, home to the 2014 Hobie 16 World Championships, the 2011 Hobie Nationals, and the one and only, Vincentia Sailing Club … after THREE long years in the making … this is going to be the event of a lifetime.

The Vincentia Sailing Club, and the NSW Hobie Cat Association, along with relevant and yet to be announced stakeholders, are already deep into the planning and preparation of this historic event. With the racing and social schedule outlined in the NOR, and the Nationals Webpage outlining all the essential details, we strongly advise sailors and families to book accommodation as soon as possible, as Jervis Bay is a widely renowned tourist destination.

So, before we get you excited for what is to come, let’s have a look to see how the sailors of the Great Southern Land have been fairing against one another in the overall Australian Hobie Class Rankings for the Hobie 14s and Hobie 16s. These sailors will be awarded for their achievements over the past year and the opening ceremony for Series 1 & 2 at the 50th Australian Hobie Cat National Championships. 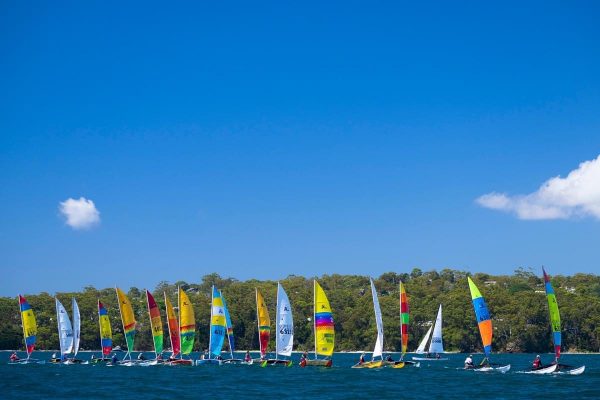 Over the 2021-22 New Year period, the Vincentia Sailing Club hosted their inaugural ‘Round the Bay Rally’ on New Years Eve, along with the NSW Hobie 14, Women & Youth State Championships w/ Dragoon Nationals. This was a truely spectacular event that was put together in a very short period of time, in replacement for the postponed National Championships.

The VSC have truely set the vibe for the Nationals later this year, with the local legends from the Jervis Bay Brewing Co. setting up shop to keep us all hydrated, and the ever faithful Hobie Cat Asia Pacific parking up the event trailer to keep the spectators happy, we are sure to be in for a good time.

And to top it all off, the racing was electric!

In the Hobie 14 Opens, ex-Hobie 16 World Champion and current No.1 Hobie 14 Sailor in Australia, Mick Butler, brought home the Gold, with the younger, slightly less-experienced Butler, snagging the Silver, and the unpredictable Victorian, Zak Rowdon, locking in the Bronze.

The Hobie 16 Open division saw thrills and spills, with the Victorian dream-team, Fletcher and Georgia Warren-Myers claiming the Gold. The Northern Beaches father-daughter duo, Dave and Hayley Fisher were close behind the Torquay locals in second place, and our Australian Association President and Secretary, Campbell Weddell and Naomi Chiu brought home the Bronze medal.

And finally, from Somers Yacht Club in Victoria, Matilda Morris and Emily Chiu were the inaugural Australian Dragoon National Champions.

The full Match Report can be viewed here.

In late February, the New South Welshmen Hobie 16, Tiger & Wildcat Sailors, along with their great mates from Victoria, were finally able to race in Twofold Bay, Eden, almost three long years in the making. With a blustery Friday afternoon sailing in a honking south-westerly, the sailors were met with two blissful days of nor-east Seabreeze.

The race course was undeniably action packed, with four heat winners throughout the 11 races.

Claiming the Gold medal was the one and only Mick Butler with his new-recruit, ‘Maddog’ Mads Gillard, on the French-made Hobie 16. Only a Finska throw behind was the dream-team Torquay, Fletcher and Georgia Warren-Myers, while rounding out the podium we had the ever-consistent, Dave and Hayley Fisher.

Read about all the action here.

It was an action-packed weekend of close racing at the 2022 Warren Taylor Homes WA Hobie 16 State Championships 2022, hosted by Geraldton Yacht Club. Known for strong winds at this time of year, the city of Geraldton had other plans for the Hobie 16 sailors. There was a mix of conditions over the 11 race series. Both days began with a fading offshore wind with many shifts in direction to keep the teams on their toes. The afternoon sessions saw stronger winds as the faithful sea breeze began to settle in.

Over the duration of the weekend, the unconventional WA conditions were dominated by dual Hobie 16 World Champion Gav Colby and his powerhouse crew Josie Mark, ending the series with seven bullets to take the Open division podium overall. In second place on 23 points overall were the Hobie hotshots, Cam Owen and Suzzi Ghent, whilst Darren Smith and Claire Bisgood were red hot on their heels.

Catch up on all the drama here. 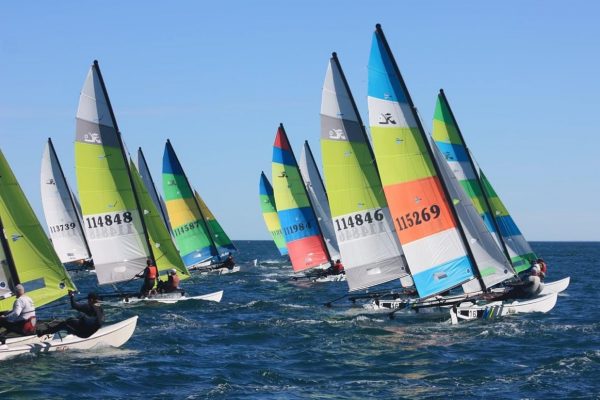 During the Victorian Labour Day Long Weekend, the Hobie Family were treated to the delights of the Bellarine Peninsula, and even greater people of the Portarlington Sailing Club. Over the three days of racing, unfortunately only six races were held in what was incredibly tough, tight and dramatic sailing conditions.

In the Hobie 14 fleet, Mick Butler has solidified his ranking as the best Hobie 14 Sailor in Australia (at this time….), with Leon Whitworth finishing with a Silver medal, after jumping back on the helm of a H14 after a whopping 20 year hiatus. Lastly, with a third place in the open fleet, a personal best for the Silent Assassin, was Bryn Robinson-Mills, sailing on our mate Quinny’s boat, “Puppy Dog II“. The young-gun also retained and reaffirmed to all, his title as the greatest youth Hobie 14 sailor in Australia.

In the Hobie 16 fleet, undoubtedly the most consistent, persistent and fierce Hobie 16 Sailors in Australia, and current No. 1 in the country, Fletcher and Georgia Warren-Myers. In second place, back in Australia permanently for the first time in 20 years, and showing no mercy, was Gavin Luxton and the eager Jervis Bay local, Jimmy Winchester. Finally, taking home the Bronze, back on the 16 with his daughter and displaying that his days on the Hobie 14 Turbo didn’t go to waste, was Tim and Elsa Tutt.

Check out the full write up here. 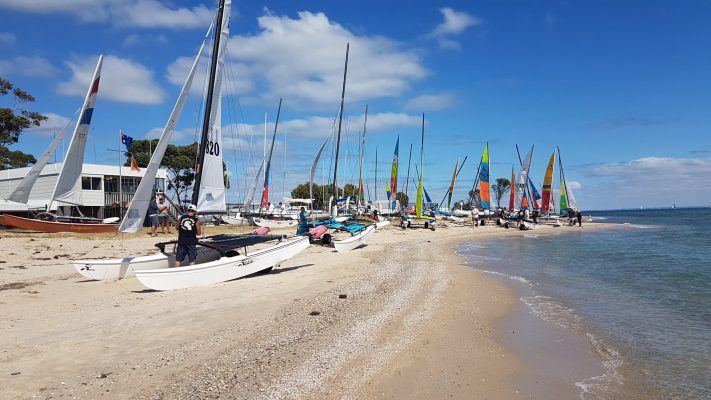 So what’s up next…

Taking place on golden waters of Moreton Bay, out of the Royal Queensland Yacht Squadron, the Queensland Hobie Cat Association is heading back to Brisbane for the 2022 State Championships. Taking place over the Queensland Labour Day Long Weekend, a solid fleet of Hobie 16s, and for the first time in modern Hobie Sailing history, Hobie 14s (who are back with a vengeance) are confirmed to be hitting the start line at this iconic location.

We can confirm the only thing greater than a screaming reach across Moreton Bay is seeing the one and only, Worst News, smashing the pin end of a Hobie 14 start line.

Running in the same format as previous years, Bad News will take place over the Queen’s Birthday Long Weekend, on the 10th, 12th and 13th of June. As always, the Gold Coast Catamaran Club will be putting on the show of a lifetime out of the unforgiving Currumbin Alley, and the glorious Rocks Resort.

Worst News has confirmed the party will be non-stop, both on and off the water, with a very decent fleet of both Hobie 16s and Hobie 14s plus Turbos confirmed to be hitting the Currumbin Alley break.

More information will be provided in the months to come. 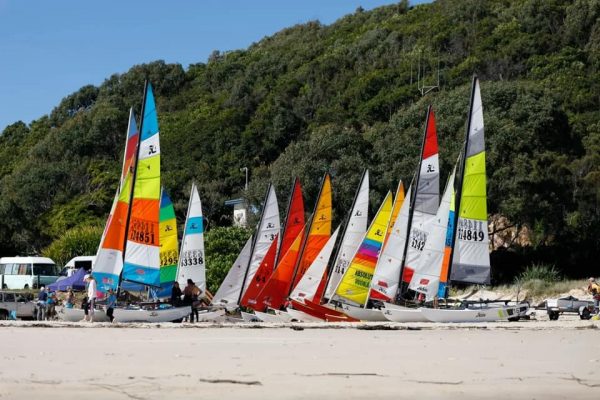 Only recently confirmed as of this week, Palm Beach Sailing Club, on the Northern Beaches of Sydney, are locked into hosting the Hobie 16s and Hobie 14 Turbos, in conjunction with their annual Bullets Regatta on the 19th and 20th of November.

The NSW Hobie Cat Association is superbly stoked to be heading back to Pittwater after they were last there in the back end of 2020. Supporting a fellow Hobie Sailing club, we hope to see a number of Hobie 16s, and for the first time officially, Hobie 14 Turbos, come from far and wide to race in what will be some glorious Cowboy Sailing.

Additionally, the NSWHCA is looking to hold an additionally States during early-mid February for the Hobie 14 Opens, Hobie 16 Women & Youth and Hobie 18s. Stay tuned for more details to come later this year.

We close now with a message of hope, excitement and anticipation. 2022 has already been a tough, strenuous and already devastating year for us all. And if this week has taught us anything, there’s still a long road until we see the light at the end of this very wet tunnel. But in the Hobie spirit, we hold strong, persevere and remain optimistic for what will be the 50th anniversary of the sport, lifestyle and Family that has been so monumentally influential throughout so many of our lives.

So, on that note, we’ll be seeing you soon, Cowboy Sailors.