How good is Hobie Sailing!

The word is in from the Hobie Family, and we can confirm that the 2022 Hobie 14, Women & Youth State Championships, along with the inaugural Hobie Dragoon Australian National Championships, was unarguably a glorious success! And after what was an awesome presentation night up at the Vincentia Country Club, the offical results are in! So here’s the VSC’s Match Report.

But before we go deep in the outcome of the regatta, we would like to acknowledge the exceptional growth that the Hobie 14 class has shown over the past few years, as expressed in our previous story The Australian Hobie 14 Class – Cowboy Racing. The absolutely glorious array of colour and competition that 35 Hobie 14s lining up on a start line is, both from when you are watching from the beach and when you are in the middle of it, is truely magical. 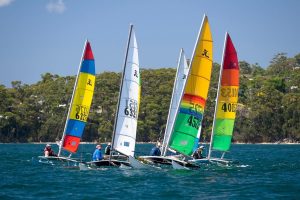 The Hobie 14 Class, after 12 incredibly challenging races ranging from a 20-25 knot Seabreeze on Day 1, to 5-10 knots of varied Nor-East, to East to Sou-East breezes, ended in spectacular fashion. The Hobie all-time legend and who could be described as the current G.O.A.T of Hobie 14 sailing, Mick Butler, brought home the gold medal on 20 points. Closely following on a mere 30 points, with a Hat-Trick of 3 Bullets on Day 2, was the brains behind the operation, the younger Butler, Pat.

It is confirmed from the Butler household that Pat will be buying the beers up until the next Nationals later in the year.

After what was very tight racing throughout the whole fleet, the Victorian powerhouse Zak Rowdon brought home the bronze on count-back, sneaking in just in front of the VSC local Will McKenzie with two bullets on Day 3 of racing. And closing out the top 5 was Masters Champion Gussy Fatches from the Royal Wangi ASC, competing in his very first on a Hobie 14 in over 20 years. 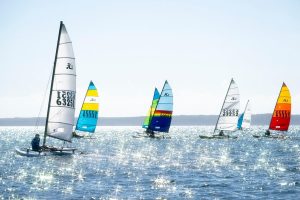 There were four entries in the Hobie 14 Youth division, the most we’ve ever had at a NSW States, and the action on the water was reflected by the revels taking place on the beach. VSC local Saxon displayed some awesome results in the overall fleet, with Noah Skewes putting on his best performance at a Hobie regatta to date! Our Disco-DJing-Dancing man from Somers, Gidi, took our the silver, whilst the youth Hobie 14 superstar, Bryn, took out the title by only one point. Seeing the boys out on the water, making a name for themselves amongst the open fleet has been a spectacular sight, and we’re looking very forward to seeing what is to come for the future.

Overall reports from the beach confirm that as tough as racing was amongst the Hobie 14 Fleet, each heat was still up for grabs on the very last down wind. 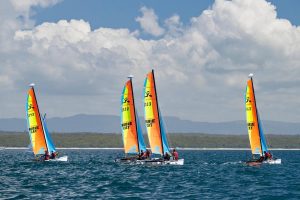 The Hobie Dragoons are a phenomenal sight. There were 6 boats entered and racing in the inaugural Dragoon National Championships, with 4 boats from Somers Yacht Club in Victoria, and 2 boats coming out of the VSC, supplied by our mates at Hobie Asia Pacific, it was absolute glamour on JB.

The boys from the VSC, Henry and Joaquin, who have only been sailing for four months, showed phenomenal improvement over the course of the regatta. Where on the last race, were leading all the way until the final downwind, where fellow VSC up and coming superstar, James, with Victorians Jack and Abi on board over the course of the regatta, took the lead with a bullet in the final race. Young Nikki, and seasoned crew, her old-man John, sailed magnificently over the week, rounding it up with the bronze. James, with Abi and Jack, took the silver after a consistent improvement on the race course. And without further ado, we congratulate and applaud the performance of our Australian National Hobie Dragoon Champions, the girls from Somers, Matilda and Emily!

Stay tuned for more action to come out of Dragoons. 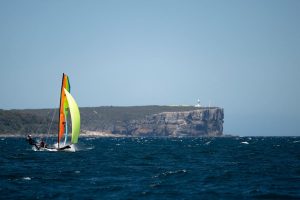 Five boats were registered in the Hobie 16 Women’s fleet, with live action taking place both on and off the water. First time skipper from Wangi, Ellie, and a returned VSC local legend, Amanda, picked up the bronze. VSC’s Queens, Clare and Kerry, brought home the silver, whilst the Queensland sister duo, Carmen and Haylie took out the gold with a display of absolute class on the water.

Two boats were entered in the Hobie 16 Youth fleet, where the firecrackers from Somers, Zoe and Tom took out the gold, with the dinghy sailors from the Northern Beaches, Xander and Oli, grabbing the silver, and taming for the first time a Hobie Cat.

In the Hobie 16 Open fleet, training for what is to be a larger than life Hobie 16 regatta in the near future, Fletcher and Georgia took out the open title displaying clearly that consistency is key. The Fishers, Dave and Hayley were very close behind, followed by Cam and Naomi pulling in the bronze in the light breeze. 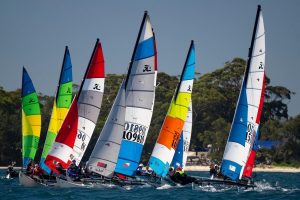 Along with the intensity our sailors faced on the water, our Cowboys and Cowgirls racers were treated to luxury on the beach, with the Jervis Bay Brewing Co. setting up a pop-up summer bar out of the VSC clubhouse. With beers on tap and local wines on offer, it was a spectacular sight on Plantation Point, with both sailors and locals alike, mingling and sharing beverages whilst looking out over Jervis Bay. We would like to formally acknowledge the efforts these legends put in, and the vibe that as created for our State Championships. 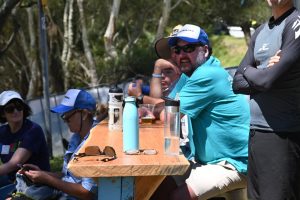 In addition to the spectacular fleet racing that took place in JB, on Day 1 of racing, our sailors were met with a 20+ Nor-easterly Seabreeze that after race 2, began causing absolute chaos on the race course. So in fashion, the VSC decided to put on the 10-year-event which is the ‘Hobie Wave Challenge’. As a 400-metre sprint race, teams of two would battle it out in time-trialed 1 v 1 races, where after all competitors have had competed one timed lap, the top eight teams went into a finals series. Eventually leading to a grand final which saw a VSC showdown of Will & Tait versing Pat and Nic. 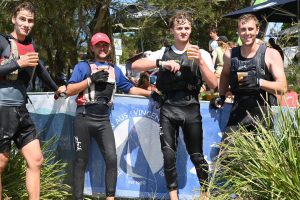 Over the week, we saw thrills, plenty of spills, and as we finally begin to sign off on the VSC Hobie 14, Women and Youth State Championships, we would like to thank and acknowledge the Hobie Family for the endless support, passion and love for Hobie Sailing that you display each and every day. What we have here in Australia is truely something that is so very special.

Be seeing you soon, Cowboy Sailors.

Final Results for the Regatta can be found here:

Here are just some of the awesome shots from our mate Brad Sissins, from Hobie Cat Asia Pacific, and VSC’s very own Helen McKenzie.